Two facts have been of major importance in the cultural history of Broumov: first, seven hundred years´ operation of the Benedictine Order, and second, the successful rise of the town, from the very beginning of its existence dependent upon the prosperity of well developed linen manufacture, mostly aimed at exports to distant markets in the inland of Bohemia as well as in the neighbouring Silesia. It was due to the well planned settling policy of the Benedictines´ abbacy from Břevnov that Broumov hollow was populated and Broumov itself founded, probably in 1255, as a centre of trade, crafts and administration of the abbatial estates. The Břevnov abbot´s subjects in Broumov were also granted, by the king Charles IV, the same privileges as those enjoyed by the inhabitants of the royal towns such as Kladsko or Hradec Králové. 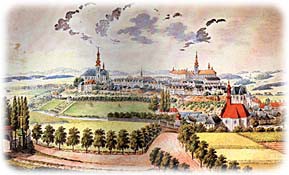 Up to this day the historical centre of Broumov has retained the original outline of a Silesian type of town, characterized by a couple of main streets running along the whole built-up area, marking off two parallel sides of a large market place and converging at both gates located on the opposite sides of the town. At the edge of the rocky headland the locator had demarcated the lots for a castle and a parish church. Down below the town walls, there was a suburb with mills, a fortified monasterial farmyard, fulling mills, a bath and a spital.

After many fires the original medieval buildings have completely disappeared except for the cemetery church of Virgin Mary. After it had been burnt down, the castle was reconstructed in 1305 and in the middle of the 14th century one of the abbots had it rebuilt into a fortified monastery with an abbey - St. Adalbert Church. Similarly, the parish church of Ss. Peter and Paul was also made of stone. The burghers started to build the town walls as early as 1357 and the great work had been finished with much difficulty and at high costs before 1380. Although just a few fragments of the rich original furniture and equipment of the monastery and the churches have remained, it is undoubted that during the 14th century Broumov became one of the most important cultural centres in north-east Bohemia.

Changes in the lifestyle of the provincial town´s society which was gradually getting wealthier manifested in building stone houses in the square and the surrounding parts of streets. After the great fire, which had destroyed most of the town, in 1549 also the monastery was reconstructed in the Renaissance style.

The era of Baroque was the time when the Benedictine abbacy of Břevnov and Broumov was developing successfully in all respects. Having overcome the disastrous effects of the Thirty Years´ War, the abbacy, especially under the abbots Tomáš Sartorius (1663 - 1700) and Otmar Zinke (1700 - 1738), reached a very good economic status, partly through increasing the extent of corvée and partly due to its own intense business activities. This enabled further building of costly monasterial premises, residences and churches. Thus, all the churches were reconstructed in Broumov, especially the Gothic abbey and also the monastery itself (both destroyed by fire), after the drawings of a master builder, Martin Allia. The terraces and the courtyards of the monastery were reconstructed and rebuilt under the supervision of an outstanding architect, Kryštof Dientzenhofer, after whose designs the new monasterial grammar school and the apothecary´s were built. Last but not least, at that time some of the plans and designs of Kilián Ignác Dientzenhofer (the best architect of Baroque in Bohemia) were finally materialized; these trends reached their top form in the radical reconstruction of the Broumov monastery in the years 1728 - 1738.

The Silesian wars meant a disaster for the town and all the dominion not only because of the plundering they involved but also the new political situation they resulted in: Silesia and Kladsko, the two neighbouring regions, with which Broumov had had very good economic and cultural contacts for centuries, were annexed by Prussia. Due to the war events the building activities of the Benidictine Order were just confined to the repair work after the monastery had been damaged by fire in 1757 and again in 1779. Nevertheless, the style of Baroque survived in the Broumov region in the form of folk rural architecture until the 19th century.

In the course of revolutionary changes in the society during the first half of the 19th century, also Broumov underwent a great transformation. The built-up area of the town stretched outside the right medieval town walls and new villas, tenement houses and first factories started growing in the adjacent parts of the surrounding villages. The civic Empire was the last style of architecture that managed to integrate the new buildings into the town and landscape in a harmonious way, preserving the unique combination of the great Baroque church architecture so typical of the Broumov region.

Extensive building activities during the era of the fast development of the textile industry at the end of the 19th century often got its way even at the expense of disrupting the purity of style and unity of the town´s architecture. The cultural riches of the town then suffered most in the decades after the World War II when many old houses were pulled down and most buildings of historic value were let to fall into disrepair.

Only during the past few years, thanks to the restitution and privatization processes, the appearance of the town has been gradually changing for the better.